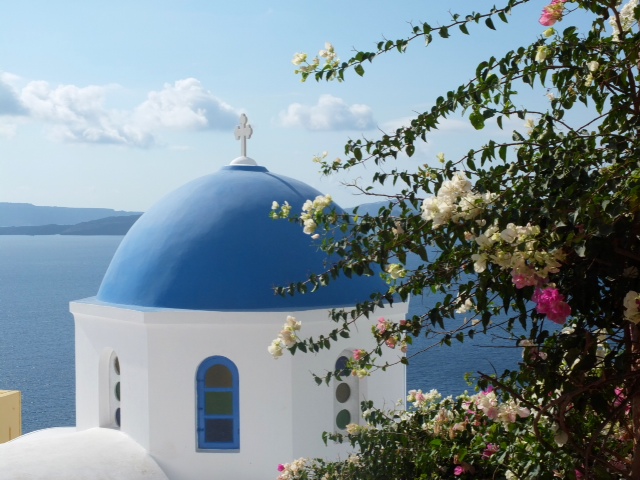 If Santorini could speak, it would tell you that here life is blue. Blue as in the color of the sky, the sea and the 365 domes of the churches that exist on this island (one for each day of the year).

Santorini is made from the remains of a volcanic eruption that formed this huge boiler, which looks like a lake, around which are located the beautiful small villages of the island.

Santorini has around 15,000 inhabitants. The island’s capital is Fira.
The main source of income is tourism and the production of wine.

Santorini comes from the name Santa Irene, but its official name is Thera meaning “the most beautiful”.
The beaches are black sand except for two, a white sand and a red one (dependent on the geological layer that they are exposed).

You can hop on a boat trip to the crater of the volcano. You can swim in volcanic waters, 5 degrees warmer than the usual.
Oia is the oldest town, beautiful but crammed with people, especially due to the excursions arriving from cruises, couples on honeymoon and “catalog” brides.

Away from the crowds, you can hear birds sing, the sound of water in the pools and the wind gently blowing in your hammock.
At night, the crickets sing their tunes.

I didn’t do much in the two days I was here. I amazed at the scenery, took pictures, relaxed in the sun, and played with the cats hotel and read. It serves well this purpose.

There was a bakery, within a 10-minute walk from our hotel, which had toasty warm chocolate pies as well as tomato, spinach and feta cheese, plus a very creamy cappuccino. What a great way to start the day!

The streets are narrow with endless staircases (or which end up in the sea) and there are more bikes than cars. Roads, reminiscent of the ancient roads of the north coast of Madeira; when as the bus makes the curves, you can only see the abyss and sometimes you have to backpedal because there’s a car coming in the opposite direction. Still, it’s both breathtaking and beautiful.

Near the hotel in Imerovigli, there was also a tavern with blue chairs and paper towels, candles, pink bougainvillea and cats nearby waiting for great luck as food crumbs fell from heaven (meaning the table).
Eat stuffed tomatoes ‘Santorini style’, octopus with dried tomatoes and vinaigrette sauce and bean’s cream with capers which was to die for…Very reasonable price, his name was Estia .

I liked everything, but the best was the golden reddish sunset, so beautiful, it makes time stop and everyone sits to see the magic happen … a glass of wine in hand, olives on the plate and those minutes in which you feel like you’re the luckiest person on earth. Consummated the act, everyone claps hands and the curtains close to give way to the moon.

Tomorrow is Athens. See you soon.