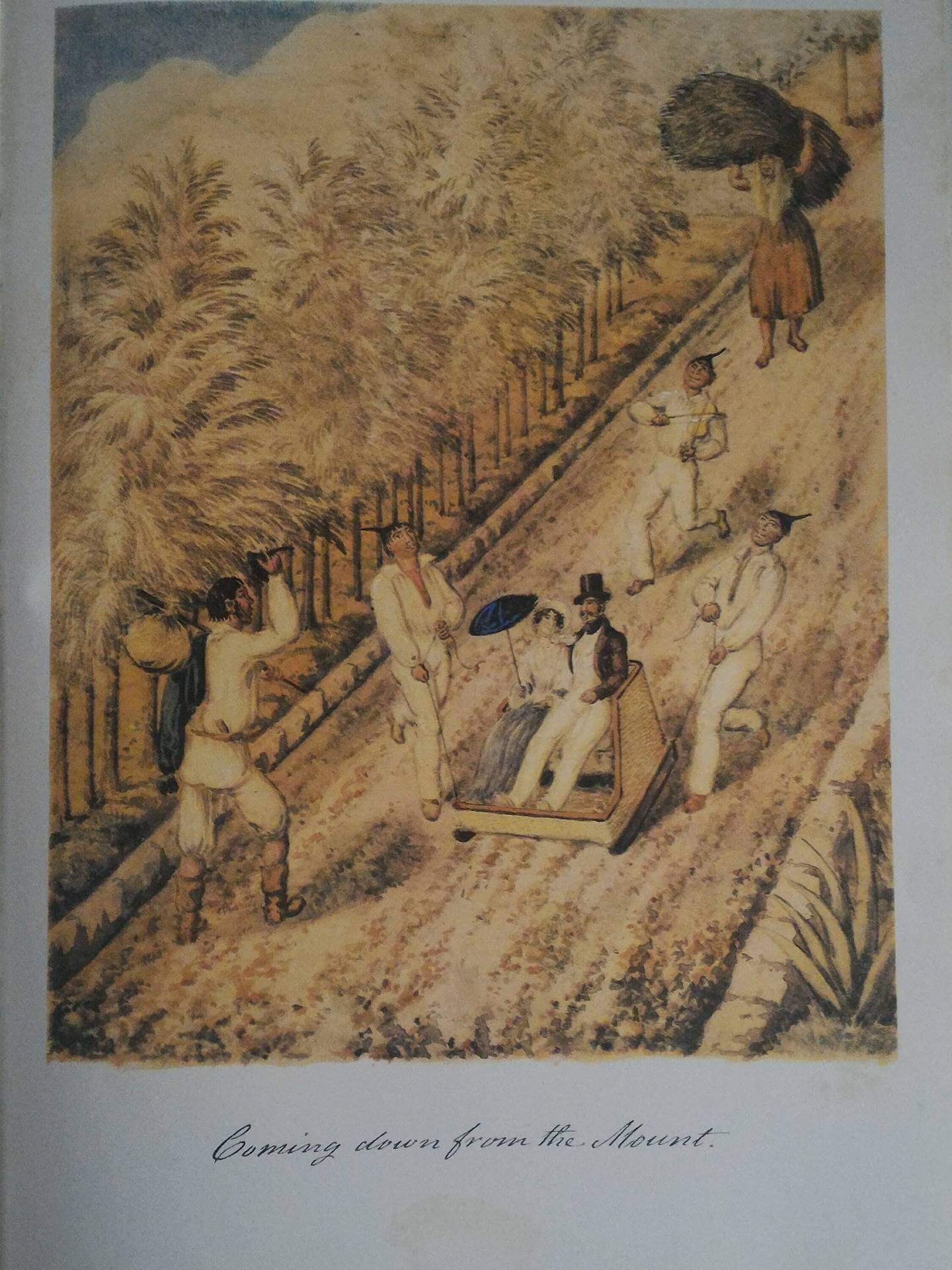 I loved reading recently a book that portrays the visit of a British tourist with her husband to Madeira in 1853.

José Henrique de Franca, her husband, 51years old, was born in Covent Garden, London and was a descendant of a Madeiran emigrant.
Isabella de Franca, the writer, 58 years old, came to Madeira to visit the land of her father in-law, throughout a honeymoon of adventures that made her share by written and trough her own paintings such inspiration.

Their stay in Madeira lasted about one year and the journey that was made by boat, the Eclipse, departured from London and lasted about 15 days.

They were staying in a hotel in Rua da Carreira, at the time one of the main streets of Funchal, where there used to be several hotels, including this one, in front of the English Church, run by Jacinto de Freitas.

She talks about trips to:
Quinta do Palheiro Ferreiro
Quinta Calaca (Clube Naval do Funchal)
English Church
Quinta do Monte
Quinta da Achada in Camacha
Caniço
“Quinta da Varanda” in Calheta (which belonged to their family)
Prazeres
Curral das Freiras
Câmara de Lobos
Machico
Ribeira Brava
Santo da Serra.
In case of the Levada of Risco, she described it like this:

“I looked up, and felt as I can never feel again! A tall, tall, semicircular concave rock, of a yet greener green than any of the rest; ferns and mosses, and hanging wreaths, bright scarlet moss cups, white flowering plants, orange colored fungi (so they appeared to me) and over this exquisite tapestry of leaves, and moss, more than a hundred sparkling jets of liquid silver, dashing from the top of the rock, and falling over into the bacon of the river beneath. The rock is so high that at the edge of it, as we looked up, stood against the clear blue sky as if it rested in its surface; while the perfect stillness of everything around except the waterfall itself, all combined to produce a sensation of intense admiration – I should rather call it awe!”

She also describes walking in the city center, through the Jesuits Church, St. Peter’s Church, Convent of Santa Clara, Neves and Lazareto. She introduces traditional costumes and peculiarities of Madeira.
One of the peculiarities was the extraordinary propensity to call people by their nicknames:
Manuel Rodrigues, the friar;
Mr. Rascal,
Mr. Monkey
two sisters who were called Black Princesses and two other white Princesses, because they were more beautiful etc
These nicknames passed from generation to generation including the “Cod family”.

They were also often given the street names where they lived eg: Diogo da Calçada, Dona Ana das Cruzes.

She also speaks about a family called “Mudos from Calheta”, which had the best Waltz dancer on the island, whose real name was Cabral.

The tours in Funchal were driven by ox push cars, boat ( when they went to Calheta), car baskets (the descent of the mount) and hammocks (carrying “people respect”) for different parts of the island, including along the levadas!

She also describes the expressions that the locals used to encourage the cattle to walk, especially “come here ox, walk beautiful”.

She also curiously reports that Funchal stores were mostly in the downtown area and some had written on the door P.V.B. meaning “bread and good wine.”

She also describes greetings so well. Apparently, since there was no bells locals usually shouted at the door:

“Is the Mrs. home?”
The answer was:
“Yes sir.”
or
“Avé Maria Purisima” – to which the other replied,
“Sinless conceived”.
Greetings from the poorest people to “People of Respect” were:
“Your blessing” – while crouched at the feet.
“God bless you” – answered as sketched the cross on his forehead.

What I liked most in this book are the descriptions related to the beauty of the island: it describes beautifully the colors of the mountains reflected by the sun, the beauty and variety of flowers, walks through the hills, the colors of the sky, the sea and the sunset, “a beauty never seen before.”

She also reports being a little shocked by the lack of hygiene and poverty of some families and how the animals were mistreated.

In conclusion she says:

“I shall always look back with affection on the happy days spent in that beautiful Island; a land of sunshine and flowers, of social and kind hospitality; a land of mountains, rocks, rainbows, pine woods, and all other bright and beautiful things; lighted up with the glowing sun, shining as I believe it never shines elsewhere, and beneath a bright blue sky, surrounded by the glorious sea in all its magnificence…I can only conclude my journal by saying that no time or change can ever lessen my grateful and happy recollections of Beautiful Madeira”.

The most amazing, it is that this diary remained incognito for nearly 100 years.

It was randomly found by the collector and Madeiran lawyer Dr Frederico de Freitas, in a second hand bookstore in London, with 342 pages, handwritten and accompanied by watercolors. It was ready to be printed and wrapped in a paper that said:

“Journal of a visit to Madeira and Portugal, with 24/25 (one double page) drawings to illustrate it. Unique item. “

Through an amazing research done by Mr. John M. dos Santos Simões, it was allowed to prove the veracity of the facts reported in this book, while added notes, comments and references to it.

This book came to be published in 1969 in English with translation into Portuguese by João Cabral do Nascimento and with the support of the Chairman of the Board of the Autonomous District of Funchal, as a way of enriching the Region Cultural Heritage.

It was thanks to Dr. Frederico de Freitas and his sense of what is beautiful and valuable that we have today in Madeira, a valuable legacy of works of art.

If you can pay a visit to the Casa Museu Frederico de Freitas, where you will find a beautiful collection of this art lover; Sculpture, tile, painting, engraving, Furniture, Ceramics, Glass and Metals.

The house is amazingly beautiful and you can visit the bedroom, the dining room, the garden inside and outside with a typical “house of pleasures” overlooking the Church of St. Peter, the living rooms and gamesroom, the kitchen and the library and all its rich interiors.

You will also find on sale a book with copies of watercolors of Isabella de Franca.

Personally, I enjoyed reading the journal and be reminded that there are things that do not go out of fashion, such as writing about your travels. Isabella, a blogger of other times?!.

A big thanks to my parents who offered me this book.