The Secrets of Madeira embroidery – Workshop

The Madeira embroidery has always been part of my life. It accompanied me through the curiosity of my childhood, in search of hidden treasures in the house cabinets of my parents, in the bed sheets offered as a wedding gift, in the baptism suits of my children and in the table cloths of my home, whenever we celebrate special days.

Bordal was founded in 1962. There is, in store, a historic route that leads us through the manufacturing process side by side with 150 years of history reflected in the (awesome) photographs accompanying the visit.

Embroideries have always existed in Madeira, whether in the hands of nobles, to decorate the house or in decorative pieces in churches and convents.
In 1850 there was an exhibition of Madeira industries, held in the Palace of S. Lourenço leading to madeira embroidery commercial use. The artistic perfection of Madeiran embroidery is also present in the Universal Exhibition, which takes place the following year in London. Madeira embroidery then begins to be produced on a large scale by the hands of Miss Elizabeth Phelps (Largo Phelps, in the Funchal city center, has the name of the family), who opens an embroidery school in her home.

Exporters specialized in their trade start to appear in Madeira. English, German and later American and Syrian are the main target markets. Currently the largest export markets are the United States, Italy and England.

1.It begins with the designer using tracing paper to give wings to creation.

2. The design is passed to the shredder that will shred the greaseproof paper previously drawn.

3. The design is printed on the fabric (the most commonly used fabrics are linen, silk, cotton and organdy) using a special blue dye, with the help of a “ball” (made of cotton) which goes through the small holes and marks the tissue areas to be embroidered. 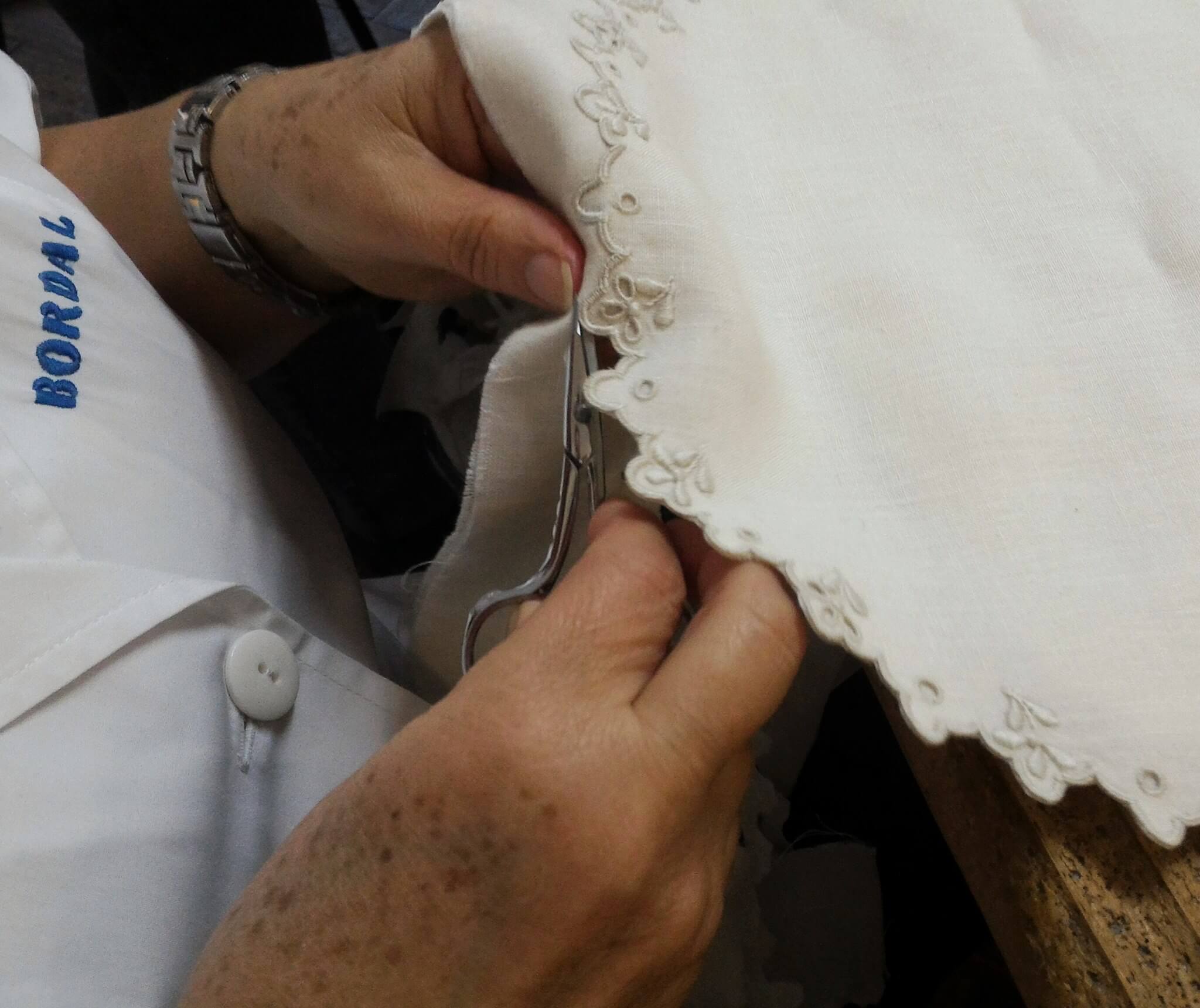 6. The embroidery is certified with the seal of approval, which testifies to the quality and authenticity of the piece, by the Wine Institute Embroidery and Crafts Madeira.

Dª Gilberta was my teacher and to see her embroidering is, in itself, worth of the visit. She told me that her favorite technique is ‘matiz’, she says that sometimes, when she sits down to embroider, she transcends to a world of creativity that makes her happy and that is visible in what she does. She told me that in the classic Madeira embroidery was done in white or light blue lines and later in bege.

With much patience and a sense of humor, there we were learning the rope point, Garanito (my favorite), the shadow point, bastido point and ‘matiz’.

I learned the ‘Urdir’ verb (which is to give several points in the drawing area to give it relief) and after embroidering and chatting over two hours we finished our class.
I must tell you that Madeira embroidery is not as easy as it may seem at first glance, it requires rigor and talent but with dedication and work, (like everything worthwhile in life) you get there.

They told me that for the first time, it was not bad… and I was happy to have learned a new art, moreover, a tradition of my island, which I hope is not lost.

After that the embroidery is washed in a sour salt water (to remove the blue ink) and ironed, in the old fashioned way, no steam.

This experience allowed me to understand that Madeira Embroidery is not only used to beautify the fabric but a way to customize a piece of art and pass it through the generations. The secret of Madeira Embroidery is that Madeirans have a special talent, transmitted from mothers to daughters. That’s why the Channel House requested the collaboration of Bordal to elaborate their collars of Madeira embroidery.
The secret of Madeira embroidery is that the Madeiran have “fairy hands” that you can’t find elsewhere in the world! ;).

Bordal is located on Rua Fernão de Ornelas, nº 77 in Funchal. Workshops take place on thurdays from 10h30-12h00. The cost of the workshop is 25 € and includes the material and the visit to the historical route. You can also order online here.

My special thanks to Susana Vacas and to all her team who guided me through the workshop.