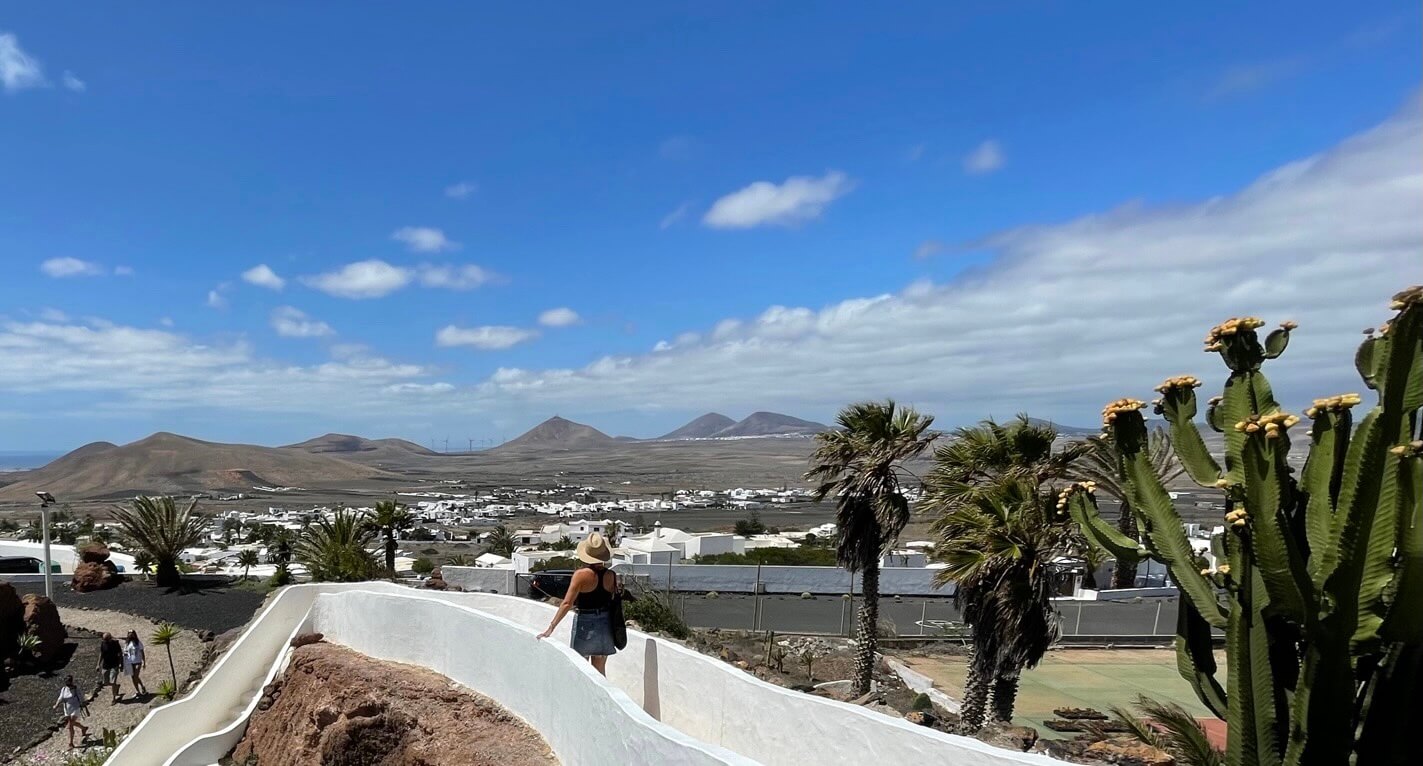 Lanzarote, you either love it or leave it…

The first time I went there I was surprised by its landscapes. They looked apparently lifeless, too arid and wild. But as the days passed, the lunar views punctuated by small white houses with green windows (they’re all similar in their own way), with their cactuses and palm trees, became a passion.

I’ve been back to Lanzarote a few times, and it’s perhaps one of the most amazing places I know. On this island, declared by UNESCO as a Biosphere Reserve, there is a happy coexistence between nature and human creation. It looks pristine though contrived. To give you an example, there are no advertising posters on the streets. One feels the respect for what nature imposes, however it is an island with lots of tourism.

The climate, the views, the art, the sculpture, the sea, the architecture… it all merges in a symbiotic way, thanks to the influence of famous local artist César Manrique, who advocated sustainable tourism development and whose work dictated a large part of our itinerary:

Teguise – the ancient capital of Lanzarote, famous for its street market on Sundays, picturesque alleys and tiny squares with tapas bars and live music. We left the market for last, and got lost in alleys and courtyards. There were three places that deserve my mention: the Hotel Boutique Palácio Ico, the El Patio café, and the shop as Marias en la Villa.

We continued to Haria to visit the César Manrique House Museum, which has one of the most spectacular bathrooms I have ever seen, difficult to describe… it is semi-open to a cactus garden and where natural plants cascade over a mirror that covers an entire wall and reflects the exterior. A studio is also located in an adjoining house and allows us to see some of the artist’s work materials.

We had lunch in a very nice square in Haria, where the famous Sociocultural Center La Tegala is located.

We also visited the iconic Mirador Del Rio. Although the view is basically the same as you get from the outside, it was worth paying €5 to get to know the details of its interior design, including an impressive balcony overlooking the neighboring island; a Graciosa.

We finished our day in Famara Beach, among surfers and kitesurfers. Yes, it’s a super windy beach whose surrounding mountains faint by the sea, in an unforgettable scenery.

Traffic was fully stopped on the most scenic road in Lanzarote, which cuts through lava fields in Timanfaya National Park. They result from volcanic eruptions that took place just 300 years ago, so everything is very untouched, in a landscape that extends over 5000 hectares, with many shades of red, making us dream of Mars. Worth the wait? Absolutely.

We continue to Playa Blanca, where there is a ferry-boat connection to Fuerteventura, but the day is already long and we chose to walk along the promenade where there are numerous fish and seafood restaurants, with signs pointing to “paella & sangria”.

About 20 minutes’ drive from Playa Blanca, there is  a nature reserve with several beaches, including the famous Playa Del Papagayo, with crystal clear waters and fine sand in an idyllic setting. To enter this protected area you have to pay €3 and although the road is unpaved, it is possible to cross it even without an all terrain car. There are two beach bars nearby, or as they call it over there; “Chiringuitos”.

Nazaret, Lagomar Museum – The home of famous actor Omar Shariff. It is said that he bet it on a game of cards that he unfortunately lost, and never returned to Lanzarote. It was built in the heart of a volcanic quarry, following the shapes of the lava, leaving the rock visible inside. It’s full of nooks, caves, bars, stairs over the water, iron doors and huge sculptures, in addition to an abundance of green plants that seem to grow out of the rock. I imagine it must have been the scene for some pretty “crazy” parties. Some details reminded me of Dali’s House at Costa Brava.

Arrecife is not particularly beautiful, but it has interesting areas such as El Charco de San Gines. There is a large lake, with picturesque fishing boats, several restaurants all around, where you feel like lingering on an afternoon of tapas and beer. Arrecife has the typical Spanish pedestrian streets that lead to the beach and plenty of shops.

Where did we stayed?

Barceló Teguise Beach. we really enjoyed the location, right in front of the beach, the soft but sophisticated decor, the friendliness of the staff, the food, and the different corners around the pool.

How did we get there?

At the moment there were no direct flights from Madeira, but 2 short flights in a row was an easy choice.

on the way out: Funchal- Tenerife – Lanzarote

and on the way back: Lanzarote – Gran Canaria – Funchal

Lots to see and do… among which the neighboring island of Graciosa, Fuerteventura and a visit to Casa José Saramago in Tias, but you should always leave something left for your next visit to Lanzarote ;).