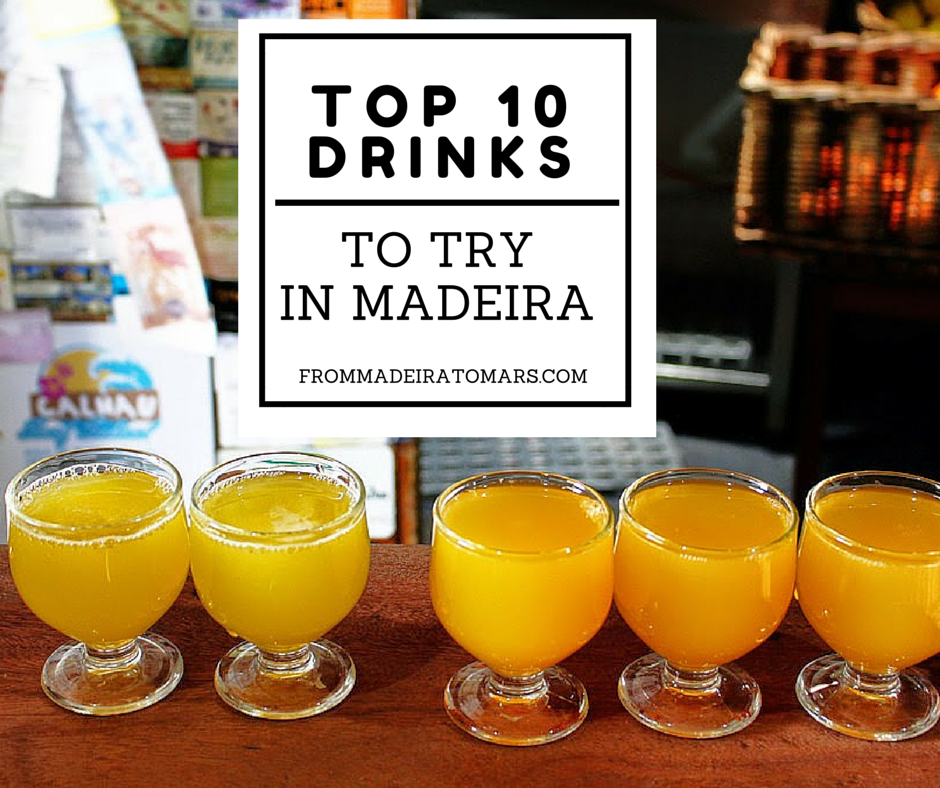 Drinks in Madeira are mostly famous due to the world known Madeira Wine, but there are others… Names like “Poncha”, an alcoholic typical beverage, “Coral” beer, “Laranjada” fizzy drink and even “Garoto” coffee will enrich your vocabulary and your taste of Madeira Island.

This is a fortified wine made in Madeira. It is produced in a variety of styles from dry to         medium dry, to sweet wines. It can be consumed with dessert or on their own as an aperitif. As a curiosity, the Declaration of Independence of USA was signed in the 4th July of 1776 and the Madeira wine was the toasting beverage of choice. We’re very proud of our wine and you can visit some of the most popular cellars in Funchal such as D’Oliveiras or Blandy’s Lodge.

Sugar cane production was the engine of the Island’s economy back to the 15th century when the island became a major supplier of sugar, which became known as “white gold”. Therefore, Poncha is a traditional alcoholic drink from the island of Madeira which is made with 5 ingredients: (20cl) of Aguardente de cana (distilled alcohol made from sugar cane juice), (5 spoons of) honey, sugar, lemon and lemon juice. It is mixed together with a tool created officially for this purpose called a mexelote. There’s a saying in Madeira that if you catch the cold, you should drink a poncha, apparently it cures it! Some say that the drink may be based on an Indian drink called Pãnch which means five in Hindi and that is from where the English drink Punch was originated.


This is a very popular drink in many local bars around the Island ( check this post Poncha’s Route), especially in the Old Town Funchal. Nowadays they are also made with different fruit juices (passion fruit, tangerine etc). According to the traditional version of Poncha, lemon juice is used. Price 1,70 euros

This is drink is typical of Câmara de Lobos. It is made of Black Beer, dry Madeira Wine, sugar, lemon and powder chocolate and ice.

This is a creamy drink made with vanilla ice cream mixed first with pineapple juice, and then sugar and beer. There is a non-alcoholic version, made with everything but beer.


Laranjada comes from the Portuguese word laranja (“orange”).  This a carbonated soft drink with an orange flavour. It was launched in 1872 being the first soft drink to be produced in Portugal. It is still very popular and in local summer festivals “Arraiais”, people drink it mixed with local dry wine.

This drink is typical from Santo da Serra. It is a low grade alcoholic drink that it is made with fermented apple juice. Price for 1 lt is about 2 euros

There is a huge coffee culture in Madeira. Popular coffee-based drinks include “Garoto” (comes from the Brazilian word that means little boy) (small) or “Chinesa” (large): black coffee with a drop of milk.

“Cortadinho”; alcoholic coffee which is made of a small black coffee with a measure of alcohol (Brandy or Aguardente)

A typical drink from Curral das Freiras “Nun’s valley”. This liqueur consists of cherries, Grape spirit and sugar.  It is much appreciated specially around Christmas along with sugar cane honey cake and biscuits.

Price: around 0,75 euros in a glass of chocolate in “O Ginginhas” Rua de Santa Maria, Funchal.

“Brisa”, fizzy drinks, is a brand name, also very popular and that come in a range of flavours: passion fruit, apple, lemon and orange. “Brisol” is the non-fizzy version.

My favourite is “Brisa Maracujá” (passion fruit) Created in 1970, it was the first soft drink in the world based on pure passion fruit juice. It is made from purple passion fruit juice (Passiflora edulis) and lightly carbonated water. The fruit pulp is at the bottom of the pack. The components are mixed resulting in a cloudy yellow colour soda with an intense flavour to passion fruit. It has won 14 Large Gold Medals Monde Selection.

A beer called “Coral” is produced by the Madeira Brewery, which dates from 1872. Manufactured from the best malts of Czech origin, fermented and ripened at low temperatures. It has a pale golden colour, a clean, aromatic flavour, a light body and a pleasant aroma loved by locals.

Drinks in Madeira, sunshine, a plunge in the sea and the local food is just one of the reasons that make Madeira such a famous holiday destination.

Let’s make a toast to that, cheers!


Looking for a hotel or an apartment to stay in Madeira. (Check here.)

(Prices were based in the prices of the local bar “Os Castrinhos”, Address: Caminho do Pinheiro das Voltas, 12. Funchal)